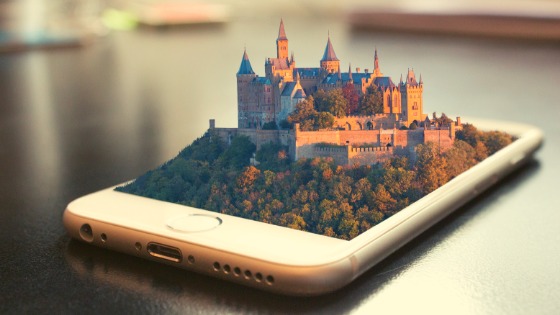 The Life Story of AR

In 1990, Tom Claudel, the researcher from The Boeing Company, created the word AR. At that time, AR technology mostly applied in military and aircraft industry. However, the high technical cost made this convenient technology delay to enter the market. Until 2013, Apple has embarked to layout in the AR market; also, Tim Cook once said the AR tech is going to be as important as smartphones. The next year, Google shocked the global market with the pioneering product – Google Glass in 2014.

Many researching organizations proposed that after 2018, it would be the time when the AR market exploded and reached its peak, which is NOW! Along with the years, the hardware equipment and software tech improved a lot, and the cost finally got reduced. Therefore, the popularization made AR more visible to the market and appeared in marketing and sales application, like Pokemon Go and IKEA’s APP.

AR is not just a cold technology term.

The AR technology has been popularized in recent years and has not been a cold word in technology anymore. We are going to introduce how AR applies in every perspective of daily life and how it brought convenience to the smart life we are having now.

Bread is the staff of life!

In order to combine the goal of smart life, AR usually combined with AI recognition system. In the video, you will see how the system works. When you open the fridge, it will actively analyze the food in it and showed you which is out of date. When you open the closet, it will detect which vitamin is going to run out and actively offered the nearest supermarket routing info in real time!

Saving more time for the important ones!

Besides that, the integration of customized info can level up the customer experience, offering more fluent purchasing process. Let’s say you pick a fajita recipe, and then the system could help you filter out the ingredient you already have and map out the route to the mart and mark the exact aisle of rest of the ingredients. While picking up the food, the detailed nutrition info is presented to you in real time. What’s better is that it also remembers your allergy and warn you during selecting. Last but not least, it saves time while actively presenting the estimated queuing time for checking out. Not only the convenience but also productivity is brought into our daily life by the AR. We could spare more time for the important ones!

With the image of Jaguar, the German brand PUMA is the leading soccer shoe company. At the very beginning, PUMA wowed the market with ATOM collection and gained popularity and got selected by Die Deutsche Fußballnationalmannschaft. Before long, PUMA had become a world-famous brand.

PUMA released the latest “PUMA LQD Origin AR” collection in April, 2019. Inspired by QR Code, PUMA printed the pattern with QR Code and bring amazing feature in augmented reality. Along with the shoes, an APP exclusive to this collection was released at the same time. You could see the shoes burning in the APP, but of course just in AR. Also, there was an interactive sport game within the APP, increasing the diversity of the brand experience.

Moving Big Furniture in One Touch

Now we are gonna take a look at another world famous brand, IKEA, how they put AR into their service. In this video, you get to see the integration of actual room space and virtual furniture. You get to be your own interior designer and pick your own stuff from IKEA products.

Design Your Own Room

Saving a lot of time from walking in the huge IKEA, you could browse through all the products within one click and place it in your own room. Like other AR applications, they give users a more convenient and productive experience. It’s a win-win to both customers and IKEA.

No more wasting time for waiting.

The first video shows detailed information on the board, including EAT and the bounding direction. What’s more, you will see the info from outside of the station, avoiding waiting for nothing.

The second video shows the integration of ticket and AR. You get to see the 3D version of the MRT map and detailed station information. With one card and phone in hand, you will be able to check all the needed info and not miss the train because AR still allows you to see the real image.

Science education is totally the stage for AR. This video shows the 3D model of the solar system and 8 planets Taking the advantages from AR, your students are able to see the planet in real size and how they orbit. This turns the traditional 2D learning into interesting and interactive activity!

Get Your Wand READY!

The gaming industry has been always a great partner with AR tech. Since “Pokemon Go” was first released in 2016, every person who identifies as pokemon trainer walked out onto the street and realized the childhood dream.

Released by the same company, “Harry Potter: Wizards Unite” finally finishes the Chinese version update at the end of June 2019. In the game, no longer are you a muggle but a wizard volunteer of Magic Ministry. Your aim is to help to discover and retrieve the magical objects scattering around the real world.

AR Application Solutions
What Is an Interactive Experience? Reveling the Secret to AR Applications!
What is CIS? Corporate Identity Design that goes hand in hand with exhibition design
HOT!
Latest Videos